Oscar James Dunn was one of three African Americans who served as a Republican Lieutenant Governor of Louisiana during the era of Reconstruction.
In 1868, Dunn became the 1st elected black lieutenant governor of a U.S. state. He ran on the ticket headed by Henry Clay Warmoth, formerly of Illinois. After Dunn died in office, then-state Senator P. B. S. Pinchback, another black Republican, became lieutenant governor and thereafter governor for a 34-day interim period. Oscar Dunn was apprenticed as a young man to a plastering and painting contractor, A. G. Wilson. (He had verified Dunn's free status in the Mayor's Register of Free People of Color 1840-1864.) Dunn was an English-speaking free Black in a city where the racial caste system was the underpinning of daily life. Free people of color had been established as a separate class of merchants, artisans, and property owners, many of who had educations. Dunn joined Richmond Lodge #4, one of a number of fraternal organizations that expanded in New Orleans, out of the Ohio Lodge during the 19th century. In the latter 1850s, he rose to Master and Grand Master of the lodge. As a Freemason, Dunn developed his leadership skills, and established a wide network and power base in the black community that was useful for his later political career. Dunn began to work to achieve equality for the millions of Blacks freed by passage of the 13th Amendment, ratified after the American Civil War. He actively promoted and supported the Universal Suffrage Movement; advocated land ownership for all Blacks; taxpayer-funded education of all Black children; and equal protection of the laws under the 14th Amendment. He joined the Republican Party, many of whose members supported suffrage for Blacks. Dunn opened an employment agency that assisted in finding jobs for the freedmen. In 1866, he organized the People's Bakery, an enterprise owned and operated by the Louisiana Association of Workingmen. Elected to the New Orleans city council in 1867, Dunn was named chairman of a committee to review Article 5 of the City Charter. He proposed that "all children between the ages of 6-18 be eligible to attend public schools. In the state Constitutional Convention of 1867-1868, this resolution was enacted into Louisiana law. The Warmoth-Dunn Republican ticket was elected, 64,941 to 38,046. Dunn was inaugurated lieutenant governor on June 13, 1868.  In 1870, Dunn served on the Board of Trustees and Examining Committee for Straight University, a historically black college founded in the city. 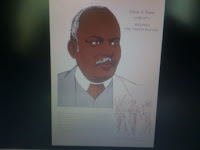