Pinckney B. S. Pinchback-1st person of African descent to become Governor of a U.S. state. Pinckney Benton Stewart Pinchback (born Pinckney Benton Stewart); was a publisher and politician, a Union Army officer, and the 1st person of African descent to become governor of a U.S. state. He was born free in Georgia. A Republican, Pinchback served as the 24th Governor of Louisiana for 15 days, from December 29, 1872, to January 13, 1873. He was later elected to the state legislature, serving in 1879-1880.
Nicholas Lemann, in Redemption: The Last Battle of the Civil War, described Pinchback as "an outsized figure: newspaper publisher, gambler, orator, speculator, dandy, mountebank  – served for a few months as the state's Governor and claimed seats in both houses of Congress following disputed elections but could not persuade the members of either to seat him. He was born free as Pinckney Benton Stewart in Georgia. His parents were Eliza Stewart, a freed slave, and Major William Pinchback, a white planter and his mother's former master. Pinchback, who also had a legal white family, freed Eliza and her children in 1836. The Civil War began, and Stewart decided to fight on the side of the Union. In 1862 he quietly made his way to New Orleans, which had just been captured by the Union Army. He raised several companies for the Union's all-black 1st Louisiana Native Guards Regiment. Commissioned a captain, Stewart was one of the Union Army's few commissioned officers of African-American ancestry. He became Company Commander of Company A, 2nd Louisiana Regiment Native Guard Infantry, made up mostly of escaped slaves. After the war in New Orleans, Stewart took his father's surname of Pinchback. He became active in the Republican Party. In 1868 Pinchback was elected as a State Senator. He became Senate President pro tempore of a Legislature that included 42 representatives of African-American descent (half of the House, and seven of 36 seats in the Senate). (At the time, the population of African Americans and whites in the state was nearly equal.) In 1871 Pinchback succeeded to the position as acting lieutenant governor upon the death of Oscar Dunn, the 1st elected African-American lieutenant governor of a U.S. state. Pinchback had a longstanding interest in education of blacks and was appointed to the Louisiana State Board of Education after the Reconstruction legislature established public education in the state for the first time. In 1885, Pinchback studied law in New Orleans at Straight University, a historically black college later known as Dillard University. He was admitted to the Louisiana bar in 1886, but never practiced. 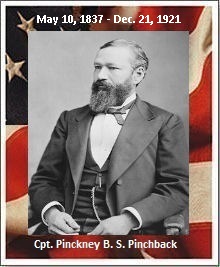