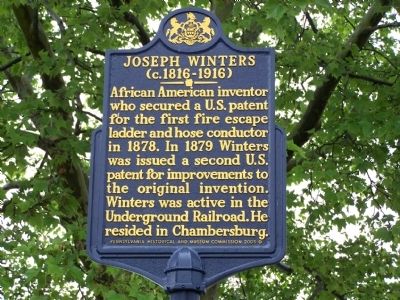 Joseph Richard Winters was an African-American abolitionist and inventor who, on May 7, 1878 received U.S. Patent number 203,517 for a wagon-mounted fire escape ladder. On April 8, 1879, he received U.S. Patent number 214,224 for an "improvement" on the ladder. On May 16, 1882, he received U.S. Patent number 258,186 for a fire escape ladder that could be affixed to buildings. Winters' ladder replaced the wooden ladder with a metal frame and parallel steps. Winters' innovation was utilized by the Chambersburg, Pennsylvania fire department who mounted the ladder on a horse-drawn wagon.  Joseph Winters worked as a farmer, and later as a mechanic for the Cumberland Valley Railroad. He was a noted fisherman and hunter; "Black and white residents long remembered him for his great nature knowledge and skills, especially in fishing and fly making." He was also a poet and lyricist.

During the time Winters lived in Chambersburg, he was active in the Underground Railroad. It has been said that it was Winters who arranged the famous meeting between Frederick Douglass and John Brown before the latter's abortive attempt to take the federal arsenal at Harpers Ferry in 1859.