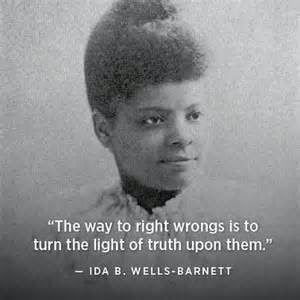 Ida Bell Wells-Barnett was an African-American journalist, newspaper editor, suffragist, sociologist, and an early leader in the civil rights movement.
Her life reveals a tenacity to push ahead despite every obstacle- to promote an idea and use every possible resource at ones disposal. Wells used her position as a teacher, a community member, a political activist, a mother, an editor, and an ordinary citizen to disseminate her rhetorical work. A precursor of Rosa Parks, she was a suffragist, newspaper editor and publisher, investigative journalist, co-founder of the NAACP, political candidate, mother, wife, and the single most powerful leader in the anti-lynching campaign in America. Her grandchildren have established a museum, a scholarship, a yearly birthday celebration, and a website to continue her work.

On February 1, 1990, the United States Postal Service issued a 25 cent postage stamp in her honor. In 2002, Molefi Kete Asante listed Wells on his list of 100 Greatest African Americans. In 1941, the Public Works Administration (PWA) built the Ida B. Wells Homes, a Chicago Housing Authority public housing project in the Bronzeville neighborhood on the south side in Chicago, Illinois. The buildings were demolished in August 2011.