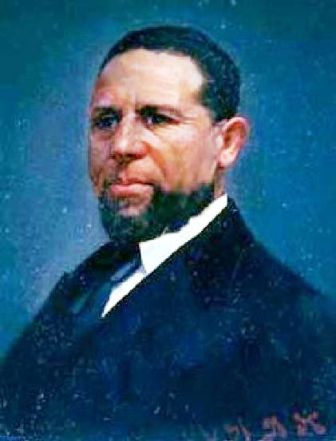 Hiram Rhodes Revels was a minister in the African Methodist Episcopal Church (AME), and a Republican politician. He was the 1st African American to serve in the United States Senate, and in the U.S. Congress overall. He represented Mississippi in 1870 and 1871 during Reconstruction. During the American Civil War, he helped organize two regiments of the United States Colored Troops and served as a chaplain. In 1865, Revels left the AME Church and joined the Methodist Episcopal Church. He was assigned briefly to churches in Leavenworth, Kansas, and New Orleans, Louisiana. In 1866, he was given a permanent pastor ship in Natchez, Mississippi, where he settled with his wife and five daughters, became an elder in the Mississippi District, continued his ministerial work, and founded schools for black children. During Reconstruction, Revels was elected alderman in Natchez in 1868. In 1869 he was elected to represent Adams County in the Mississippi State Senate. At the time, the state legislature elected U.S. senators from Mississippi. In 1870 Revels was elected by a vote of 81 to 15 in the Mississippi State Senate. When Revels arrived in Washington, DC, Southern Democrats opposed seating him in the Senate. Revels advocated compromise and moderation. He vigorously supported racial equality and worked to reassure senators about the capability of blacks. In his maiden speech to the Senate on March 16, 1870, he argued for the reinstatement of the black legislators of the Georgia General Assembly, who had been illegally ousted by white Democratic Party representatives. Revels resigned two months before his term expired to accept appointment as the 1st president of Alcorn Agricultural and Mechanical College (now Alcorn State University). In 2002, scholar Molefi Kete Asante listed Hiram Rhodes Revels as one of 100 Greatest African Americans.