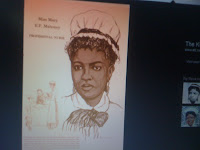 Mary Eliza Mahoney was the 1st African American to study and work as a professionally trained nurse in the United States, graduating in 1879. Mary was born in Dorchester, Massachusetts, and became interested in nursing when she was a teenager.
In 1908, she co-founded the National Association of Colored Graduate Nurses (NACGN) with Adah B. Thoms. The NACGN eventually merged with the American Nurses Association (ANA) in 1951. She is commemorated by the biennial Mary Mahoney Award of the ANA for significant contributions in advancing equal opportunities in nursing for members of minority groups.
Born in Dorchester, Massachusetts, Mary Eliza Mahoney worked at the New England Hospital for Women and Children (now the Dimock Community Health Center) for 15 years before being accepted into its nursing school, which was America’s first.
The Hospital was founded by women doctors in 1862. It started its nurse training program in 1872 with 42 students, but only 4 actually graduated, including Linda Richards, who graduated as the 1st formally educated nurse in the United States. In 1896, Mahoney was one of the original members of a predominantly white Nurses Associated Alumnae of the United States and Canada.
Mahoney worked for many years as a private care nurse, earning a distinguished reputation. In 1908 she was cofounder of the National Association of Colored Graduate Nurses (NACGN). In 1911 it became the American Nurses Association (ANA). From 1911 to 1912 she served as director of the Howard Orphan Asylum for black children in Kings Park, Long Island, New York.
In retirement, Mahoney was still concerned with women's equality and a strong supporter of women’s suffrage (the movement to gain women the right to vote.) In 1920, she was among the 1st women in Boston to register to vote.  In 1936, the National Association of Colored Graduate Nurses created an award in honor of Mahoney for women who contributed to racial integration in nursing. The American Nurses Association  inducted her into the Nursing Hall of Fame in 1976.