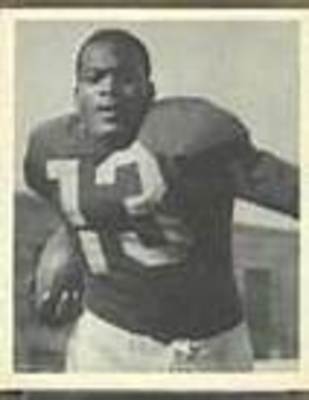 Kenneth S. Washington was a professional football player who was the 1st African-American to sign a contract with a National Football League (NFL)team in the modern (post-World War II) era.
He was a star running back at Abraham Lincoln High School in Los Angeles

In college at UCLA, he rushed for 1,914 yards in his college career, a school record for 34 years. He was one of four African American players on the 1939 UCLA Bruins football team, the others being Woody Strode, Jackie Robinson and Ray Bartlett. They played eventual conference and national champion USC to a 0-0 tie with the 1940 Rose Bowl on the line. It was the first UCLA-USC rivalry football game with national implications. UCLA teammates have commented how strong Washington was when confronted with racial slurs and discrimination.
He led the nation in total offense and became the 1st consensus All-American in the history of the school's football program in 1939. However, he was named to 2nd team All-America selection instead of the 1st and was omitted from the East-West Shrine Game that year. These slights were the source of much outrage among West Coast media outlets which blamed them on racial discrimination. . In 1946, when the Cleveland Rams moved to Los Angeles, the commissioners of the Los Angeles Coliseum stipulated as part of the agreement that the team be integrated. As a result, the team signed Washington on March 21, 1946, and fellow UCLA (and Hollywood) teammate Strode later on May 7. His NFL stint only lasted three years, but the impact he had on the league was enormous. He was inducted to the College Football Hall of Fame in 1956 and his number 13 jersey was the first to be retired at UCLA. After his retirement from football, Washington became a distinguished police officer for the Los Angeles Police Department. For his contribution to sports in Los Angeles, he was honored with a Los Angeles Memorial Coliseum "Court of Honor" plaque by the Coliseum commissioners.