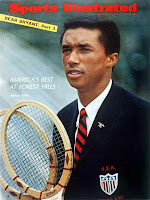 Arthur Robert Ashe, Jr. was an American World No. 1 professional tennis player. He won three Grand Slam titles, ranking him among the best tennis players from the United States.
Ashe, an African American, was the first black player selected to the United States Davis Cup team and the only black man ever to win the singles title at Wimbledon, the US Open, or the Australian Open. He retired in 1980. He was ranked World No. 1 by Harry Hopman in 1968 and by Lance Tingay of The Daily Telegraph and World Tennis Magazine in 1975. In the ATP computer rankings, he peaked at No. 2 in May 1976. On June 20, 1993, Ashe was posthumously awarded the Presidential Medal of Freedom by then United States President Bill Clinton.                                                Ashe started playing tennis aged 7 and began practicing on the courts where his natural talent was spotted by Virginia Union University student and part-time Brookfield tennis instructor, Ron Charity who as the best black tennis player in Richmond at the time, began to teach Ashe the basic strokes and encouraged him to enter local tournaments.