Dolores Clara Fernandez Huerta is a labor leader and civil rights activist who co-founded the National Farmworkers Association, which later became the United Farm Workers (UFW). Huerta has received numerous awards for her community service and advocacy for workers', immigrants', and women's rights, including the Eugene V. Debs Foundation Outstanding American Award, the United States Presidential Eleanor Roosevelt Award for Human Rights and the Presidential Medal of Freedom. As a role model to many in the Latino community, Huerta is the subject of many corridos (ballads) and murals. Huerta was the daughter of Juan Fernandez—a miner, field/farm worker, union activist, and state assemblyman—and Alicia Chavez. Huerta's mother was known for her kindness and compassion towards others and was active in community affairs, numerous civic organizations, and the church. She encouraged the cultural diversity that was a natural part of Huerta's upbringing in Stockton. Alicia Chavez was a businesswoman who owned a restaurant and a 70-room hotel where she welcomed low-wage workers and farm worker families for affordable prices and sometimes even for free. This prompted Huerta to think about civil rights. In 1955, Huerta co-founded the Stockton chapter of the Community Service Organization, (CSO) and in 1960 co-founded the Agricultural Workers Association which set up voter registration drives and pressed local governments for barrio improvements. In 1962, after the CSO turned down Chávez's request, as their president, to organize farm workers, Chávez and Huerta resigned from the CSO. She co-founded the National Farm Workers Association with César Chávez, which would later become the.United Farm Workers Organizing Committee. Huerta's organizing skills were essential to the growth of this budding organization. As an advocate for farmworkers' rights, Huerta has been arrested 22 times for participating in non-violent civil disobedience activities and strikes. 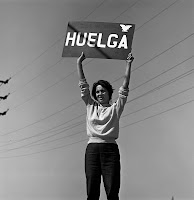