Charles Richard Drew was an American physician, surgeon, and medical researcher. He researched in the field of blood transfusions, developing improved techniques for blood storage, and applied his expert knowledge to developing large-scale blood banks early in World War II. This allowed medics to save thousands of lives of the Allied forces. As the most prominent African-American in the field, Drew protested against the practice of racial segregation in the donation of blood, as it lacked scientific foundation, an action which cost him his job. Drew won an athletics scholarship to Amherst College in Massachusetts, where he graduated in 1926. An outstanding athlete at Amherst, Drew also joined Omega Psi Phi

fraternity. He attended medical school at McGill University in Montreal, Canada, receiving his M.D. in 1933 as well as a Master of Surgery degree, and ranked 2nd in his class of 127 students. A few years later, Drew did graduate work at Columbia University, where he earned his Doctor of Medical Science degree, becoming the first African American to do so.     In 1941, Drew's distinction in his profession was recognized when he became the 1st African American surgeon selected to serve as an examiner on the American Board of Surgery. Drew created a central location for the blood collection process where donors could go to give blood. He made sure all blood plasma was tested before it was shipped out. He ensured that only skilled personnel handled blood plasma to avoid the possibility of

contamination. Dr. Drew also established the American Red Cross blood bank, of which he was the first director. In 1939, Drew married Minnie Lenore Robbins, a professor of home economics at Spelman College whom he had met earlier that year. They had three daughters and a son. His daughter Charlene Drew Jarvis was the President of Southeastern University from 1996 until 2009. 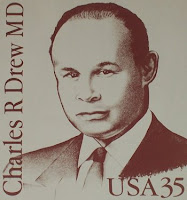