Lolita Lebrón was a Puerto Rican nationalist who was convicted of attempted murder and other crimes after leading an assault on the United States House of Representatives in 1954, resulting in the wounding of five members of the United States Congress. She was freed from prison in 1979 after being granted clemency by President Jimmy Carter. 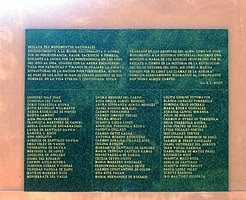 In 1952, after the Constitution of the Commonwealth of Puerto Rico was promulgated, the Nationalist Party began a series of revolutionary actions, including the Jayuya Uprising. As part of this initiative, Pedro Albizu Campos ordered her to organize attacks in the United States, focusing on locations that were "the most strategic to the enemy". She became the leader of a group of nationalists, who attacked the United States House of Representatives in 1954. She was incarcerated as a result. Lebrón remained imprisoned 25 years, when President Carter issued pardons to the group involved. After their release in 1981, the nationalists returned to Puerto Rico, where independence movements received them with a celebration.          Plaque honoring the female participants of the 1950 Jayuya Uprising