Jupiter Hammon was a black poet who in 1761 became the first African-American writer to be published in the present-day United States. Additional poems and sermons were also published. Born into slavery, Hammon was never emancipated. He was living in 1790 at the age of 79, and died by 1806. A devout Christian, he is considered one of the founders of African-American literature. His first published poem, "An Evening Thought. Salvation by Christ with Penitential Crienes: Composed by Jupiter Hammon, a Negro belonging to Mr. Lloyd of Queen's Village, on Long Island, the 25th of December, 1760," He published three other poems and three sermon essays. Although not emancipated, Hammon participated in new Revolutionary War groups such as the Spartan Project of the African Society of New York City. At the inaugural meeting of the African Society on September 24, 1786, he delivered his "Address to the Negroes of the State of New York", also known as the "Hammon Address." Hammon: historical figures that changed the world. 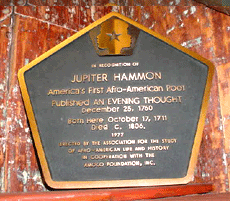