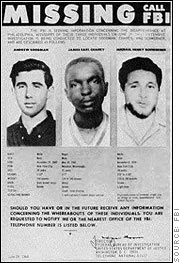 On June 21, 1964, three young civil rights workers—a 21-year-old black Mississippian, James Chaney, and two white New Yorkers, Andrew Goodman, 20, and Michael Schwerner, 24—were murdered near Philadelphia, in Nashoba County, Mississippi. They had been working to register black voters in Mississippi during Freedom Summer and had gone to investigate the burning of a black church. They were arrested by the police on trumped-up charges, imprisoned for several hours, and then released after dark into the hands of the Ku Klux Klan, who beat and murdered them. It was later proven in court that a conspiracy existed between members of Neshoba County's law enforcement and the Ku Klux Klan to kill them.  The FBI arrested 18 men in October 1964, but state prosecutors refused to try the case, claiming lack of evidence. The federal government then stepped in,. In 1967, seven men were convicted on federal conspiracy charges and given sentences of 3 to 10 years, but none served more than 6. No one was tried on the charge of murder. The contemptible words of the presiding federal judge, William Cox, give an indication of Mississippi's version of justice at the time: "They killed one ni---r, one Jew, and a white man. I gave them all what I thought they deserved." Another 8 defendants were acquitted by their all-white juries, and another 3 ended in mistrials. One of those mistrials freed Edgar Ray "Preacher" Killen—believed to be the ringleader—after the jury in his case was deadlocked by one member who said she couldn't bear to convict a preacher. On Jan. 7, 2005, four decades after the crime, Edgar Ray Killen, then 80, was charged with three counts of murder. He was accused of orchestrating the killings and assembling the mob that killed the three men. On June 21—the 41st anniversary of the murders—Killen was convicted on three counts of manslaughter, a lesser charge. He received the maximum sentence, 60 years in prison.