Colin Powell-1st. A.A. Chairman of the Joint Chiefs of Staff 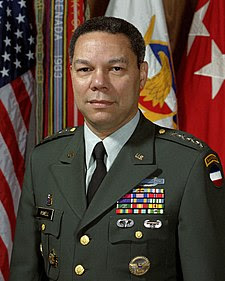 Colin Luther Powell is an American statesman and a retired four-star general in the United States Army. He was the 65th United States Secretary of State, serving under U.S. President George W. Bush from 2001 to 2005, the first African American to serve in that position. During his military career, Powell also served as National Security Advisor (1987–1989), as Commander of the U.S. Army Forces Command (1989) and as Chairman of the Joint Chiefs of Staff (1989–1993), holding the latter position during the Persian Gulf War. He was the 1st, and so far the only, African American to serve on the Joint Chiefs of Staff, and was the 1st of two consecutive African American office-holders to hold the key Administration position of U.S. Secretary of State. He received his BS degree in geology from the City College of New York in 1958. He later earned a MBA degree from the George Washington University in 1971, after his second tour in Vietnam. Powell was a professional soldier for 35 years, holding a variety of command and staff positions and rising to the rank of General.  Powell described joining the Reserve Officers' Training Corps (ROTC) during college as one of the happiest experiences of his life; discovering something he loved and could do well, he felt he had "found himself. "I not only liked it, but I was pretty good at it. That's what you really have to look for in life, something that you like, and something that you think you're pretty good at. And if you can put those two things together, then you're on the right track, and just drive on.”

Cadet Powell joined the Pershing Rifles, the ROTC fraternal organization and drill team begun by General John Pershing. Even after he had become a general, Powell kept on his desk a pen set he had won for a drill team competition.

Upon graduation, he received a commission as an Army second lieutenant. After attending basic training at Fort Benning, Powell was assigned to the 48th Infantry, in West Germany, as a platoon leader.