Archie Alphonso Alexander was an African-American mathematician and engineer. He was an early African-American graduate of the University of Iowa and the first to graduate from the University of Iowa's College of Engineering. He was also a governor of the U.S. Virgin Islands. Archie began his engineering education at the State University of Iowa. "Although he initially went to Des Moines College and attempted to join the white-only American football team there, he was declined. As a result, he played tackle from 1910 to 1912 [at Iowa] and was nicknamed 'Alexander the Great'." During the summer Alexander worked as a draftsman for Marsh Engineers, a Des Moines bridge-designing firm and in 1912, he received a bachelor of science degree, becoming the University of Iowa's first black football player and engineer.  In 1929, he formed Alexander & Repass, where he would work until his death. They were responsible for the construction of many roads and bridges, including the Whitehurst Freeway, the Tidal Basin Bridge, and an extension to the Baltimore-Washington Parkway. With his business partner, George Higbee, Alexander designed the Tuskegee Airfield and the Iowa State University heating and cooling system. Starting at home, they built the heating plant and powerhouse at the University of Iowa, a sewage treatment plant in Grand Rapids, Michigan, an airfield in Tuskegee, Alabama, and the Tidal Basin bridge and seawall and the Whitehurst Freeway in Washington, D.C. 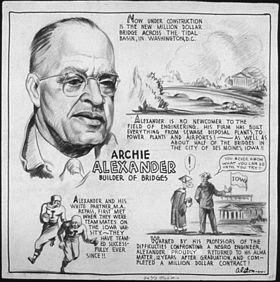