William D. Davis and His Saddle

Wm D. Davis received little education but it did not stop him from becoming one of the leading agriculturists of Wyandotte County in Kansas. Although he had assisted his father in his various business ventures earlier, he became more engaged in general farming. He had become one of the prominent cattle breeders of Wyandotte County with 560 acres of land, 320 of which he used for his cattle breeding business. He also owned a mill in Leavenworth, Kansas and was also a postmaster for 16 years.


Why did He Invent His Saddle?

Like most inventions, this one was developed to answer a need. He invented his saddle while serving as a buffalo soldier, African American soldiers serving either in the 9th and 10th Cavalry or 24th and 25th Infantry who manned the Western borders. Davis served under the leadership of General Pershing in the 10th Cavalry division. When the troop ran after Cree Indians, they had to travel a long and gruelling journey on hard-trotting horses. The rides were rough so William Davis had an idea how to make these rides easier by modifying the saddle they were using. What he did was place springs under the seat and above the stirrups. The springs respond to the motion of the horse making the ride smoother and easier. It also made the saddle easier to adjust and more durable. Although it was not uncommon to use springs in saddles during that time, the placement and the type of springs used for his riding saddle were totally different than those existing saddles already in use. He filed a patent for his riding saddle in 1896. 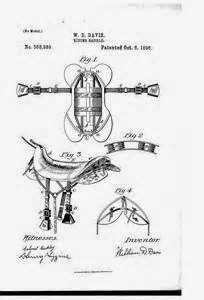