Octavius Valentine Catto  was a black educator, intellectual, and civil rights activist in Philadelphia. He became Principal of male students at the Institute for Colored Youth, where he had also been educated. Born free in Charleston, South Carolina, in a prominent mixed-race family, he moved north as a boy with his family. He became educated and served as a teacher, becoming active in civil rights. As a man, he also became known as a top cricket and baseball player in 19th-century Philadelphia, Pennsylvania. In Philadelphia, Catto began his education at Vaux Primary School and then Lombard Grammar School, both segregated institutions. In 1853, he entered the all-white Allentown Academy in Allentown, New Jersey, located east of the Delaware River. In 1854, when his family returned to Philadelphia, he became a student at that city's Institute for Colored Youth (ICY). Managed by the Society of Friends (Quakers), ICY's curriculum included classical study of Latin, Greek, geometry, and trigonometry. While a student at ICY, Catto presented papers and took part in scholarly discussions at "a young men's instruction society".
Catto became a martyr to racism, as he was shot and killed in election-day violence in Philadelphia, where ethnic Irish of the Democratic Party, which was anti-Reconstruction and had opposed black suffrage, attacked black men to prevent their voting for Republican candidates. Catto graduated from ICY in 1858, winning praise from principal Ebenezer Bassett. The Civil War increased Catto's activism for abolition and equal rights. He joined with Frederick Douglass and other black leaders to form a Recruitment Committee to sign up black men to fight for the Union and emancipation. Catto fought fearlessly for the desegregation of Philadelphia’s trolley car system. The May 18, 1865 issue of the New York Times ran a story discussing the civil disobedience tactics employed by Catto as he fought for civil rights: Last evening a colored man got into a Pine-street passenger car, and refused all entreaties to leave the car, where his presence appeared to be not desired.
The conductor of the car, fearful of being fined for ejecting him, as was done by the Judges of one of our courts in a similar case, ran the car off the track, detached the horses, and left the colored man to occupy the car all by himself. The colored man still firmly maintains his position in the car, having spent the whole of the night there. 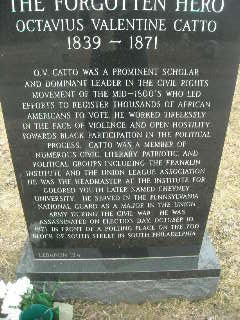 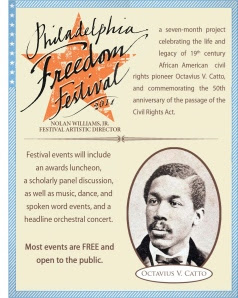