Leymah Roberta Gbowee is a Liberian peace activist responsible for leading a women's peace movement that helped bring an end to the Second Liberian Civil War in 2003. Her efforts to end the war, along with her collaborator Ellen Johnson Sirleaf, helped usher in a period of peace and enabled a free election in 2005 that Sirleaf won. This made Liberia the first African nation to have a female president. She, along with Ellen Johnson Sirleaf and Tawakkul Karman, were awarded the 2011 Nobel Peace Prize "for their non-violent struggle for the safety of women and for women's rights to full participation in peace-building work." 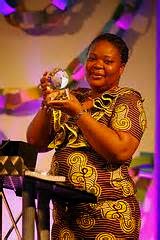 The Liberian civil war, which lasted from 1989 to 2003 with only brief interruptions, was the result of economic inequality, a struggle to control natural resources, and deep-rooted rivalries among various ethnic groups, including the descendants of the freed American slaves who founded the country in 1847.