André Pinto Rebouças was a Brazilian military engineer, abolitionist and inventor, son of Antônio Pereira Rebouças (1798–1880) and Carolina Pinto Rebouças. Lawyer, member of Parliament and an adviser to Pedro II of Brazil, his father was the son of a manumitted slave and a Portuguese tailor. His brothers Antônio Pereira Rebouças Filho and José Rebouças were also engineers.
Rebouças became famous in Rio de Janeiro, at the time capital of the Empire of Brazil, solving the trouble of water supply, bringing it from fountain-heads outside the town.
Serving as a military engineer during the Paraguayan War in Paraguay, Rebouças developed a torpedo, which was used successfully.
Alongside Machado de Assis and Olavo Bilac, Rebouças was a very important middle class representative with African descent, he also was one of the most important voices for the abolition of slavery in Brazil.
In the 1880s, Rebouças began to participate actively in the abolitionist cause, he helped to create the Brazilian Anti-Slavery Society, alongside Joaquim Nabuco, José do Patrocínio and others.

After the Republican coup d'État, Rebouças went into exile with Pedro II to Europe. For two years he stayed exiled in Lisboa, as a correspondent for The Times of London. 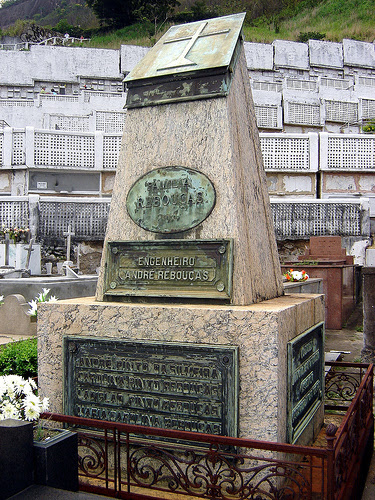