Jonathan Clarkson Gibbs, II was a Presbyterian minister and a prominent African-American officeholder during Reconstruction. He served as 1st black Secretary of State and Superintendent of Public Instruction of Florida, and along with Josiah Thomas Walls, was among the most powerful black officeholders in the state during Reconstruction. Gibbs was born free in Philadelphia, Pennsylvania. His father, the Reverend Jonathan Gibbs I, married Maria Jackson. Gibbs and his brother, Mifflin, attended the local Free School in Philadelphia. The young Gibbs apprenticed to a carpenter. Both brothers eventually converted to Presbyterianism. Gibbs impressed the Presbyterian assembly such that the Assembly provided financial backing for him to attend Kimball Union Academy in Meriden, New Hampshire.
While at the college, Gibbs was influenced by three professors who would affect his thinking as a missionary, educator and politician. He was a member of the abolitionist movement while a college student, and participated in several conventions, appearing by name in The Liberator.
He was the 3rd African-American to graduate from Dartmouth College, and, following on the heels of John Brown Russwurm, Gibbs became the 2nd black man in the nation to deliver a commencement address at a college. Along with William Still, Gibbs fought for equal accommodations and transportation in Philadelphia, decrying segregation of the city's rail cars. Gibbs' efforts in the movement to abolish slavery helped both free blacks and their enslaved brethren. As the Civil War drew to a close. Gibbs eventually settled in Charleston, South Carolina, where he established himself in the local church and opened a school for educating the freedmen. Gibbs moved to Florida in 1867 where he started a private school in Jacksonville. Gibbs was also commissioned as a Lieutenant Colonel in the Florida State Militia. Gibbs was also elected as a Tallahassee City Councilman in 1872. He was appointed Superintendent of Public Instruction in 1873. 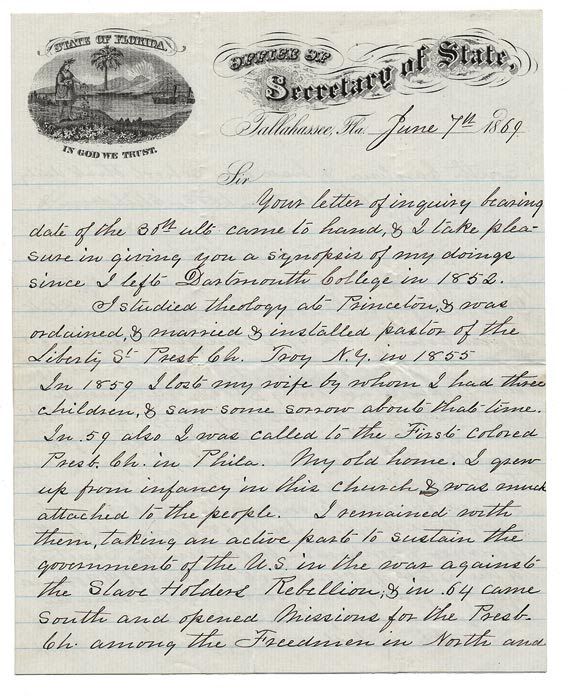