One of the most basic and effective tools in your arsenal in the war on dirt is the mop. It allows reach, effective absorption, and broom-like benefits. This humble item is taken for granted in most households, but it is often one of the things that we use the most. Once again, gratitude is owed to an African American inventor, and in this case, his name was Thomas Stewart.                                                                      Thomas Stewart of Kalamazoo, Michigan, patented a new type of mop (U.S. patent #499,402) on June 11, 1893. Thomas Stewart had invented a clamping mop that could wring the water out of itself by the use of a lever. Stewart is a prolific inventor who often collaborated with others in order to create useful patents. He is credited with improving the traffic signal in conjunction with William Johnson, and also developed an oscillating machine that made it easier to bend and shape metal. While both of these are amazing achievements in their selves, Stewart received fame for developing a mop design that is the template for modern designs. His concept is fairly standard now, but in the 1880’s, the idea was a total revolution. the problem at the time was that mops still required those using them to manually wring out the fibers, which was physically demanding, and wasted a lot of time. Stewart did away the spaghetti style mop, and designed a long stick with a clamp that held the fiber in place. Once the material was saturated, a series of springs were pulled to draw the clamp shut, expelling the accumulated water and dirt. 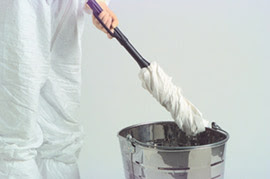