Clara C. Frye was an African American nurse in Tampa, Florida who established the Clara Frye Hospital, where she worked for 20 years in the early 1900s. Frye's hospital admitted patients of all ethnicities. Frye, formerly of Tampa, was trained in nursing care in Alabama and moved to Tampa in 1901. She had heard many stories about the high volume of black patients who died because they were denied medical treatment in “whites only” facilities. At the time, the Tampa Municipal Hospital, now Tampa General Hospital, did not admit African American patients. This changed in the 1950s. She committed her life to providing medical care to Tampa’s black citizens. She began caring for the sick and injured black population in her small Tampa home. In 1923, she moved to a small 17-bed hospital on Lamar Avenue, where she relied heavily on donations to alleviate the financial struggles of running a hospital. In 1928, the City of Tampa purchased the hospital, which was then known as the Tampa Negro Hospital. Ten years later the structure was dedicated as the Clara Frye Memorial Hospital.
The Clara Frye Memorial Hospital that existed in West Tampa from 1938 to 1967 was named after her. The original Tampa General Hospital building was renamed after Frye in 1991. Frye will also be immortalized along with other prominent Tampa historical figures on the Tampa Riverwalk with a bronze bust. A memorial garden at Water Works Park (Tampa) honors her legacy. 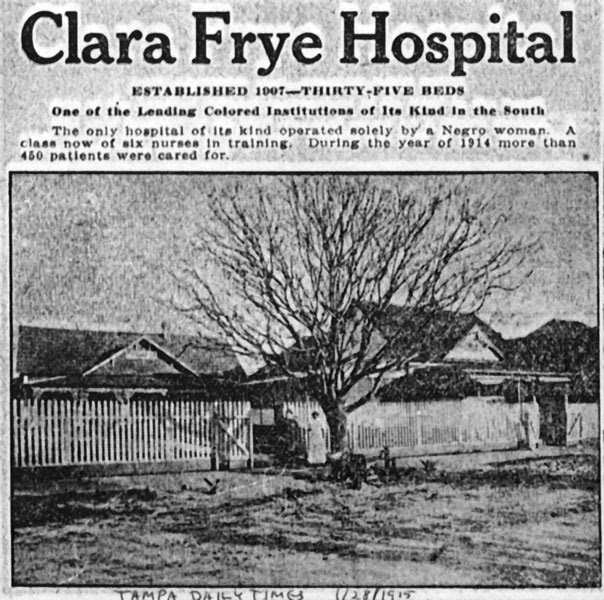