Joshua DuBois is the former head of the Office of Faith Based and Neighborhood Partnerships in the Executive Office of the President of the United States under President Barack Obama. In February 2013 he stepped down to write a book of devotionals based on the ones he sends Obama, start a consulting firm, and become the weekly religion columnist for Newsweek and The Daily Beast.
DuBois graduated cum laude from Boston University in 2003 with a bachelor's degree in political science. From there, he went on to Princeton University's Woodrow Wilson School of Public and International Affairs, where he earned a master's degree in public affairs in 2005. Meanwhile, he worked as an aide to Representative Rush D. Holt, Jr.. After watching Barack Obama's speech to the 2004 Democratic National Convention on television, DuBois decided to work for Obama, then a candidate for the U.S. Senate. Eventually, Obama hired him as a Senate aide. In 2008, DuBois was religious affairs director for the Obama presidential campaign. In the White House, DuBois managed President Obama's fatherhood initiative, as well as the administration's work on religion in foreign affairs. He also began the

tradition of the White House Easter Prayer Breakfast. DuBois served as an informal spiritual advisorto President Obama, and still sends the President a devotional message each morning. Obama remarked at the National Prayer Breakfast that these devotions "mean the world to me." DuBois has authored three cover stories for Newsweek magazine, including "The Fight for Black Men", which historian Taylor Branch called "stunning". On April 7th, 2014, DuBois delivered the latest in the series of William Belden Noble Lectures at Harvard University, joining Theodore Roosevelt, Dr. Francis Collins and others who have delivered the annual lecture. 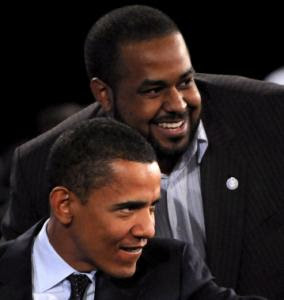