Marcia L. Fudge (1952-10-29) is the U.S. Rep. for Ohio's 11th congressional district, serving since 2008. She is a member of the Democratic Party. The district includes an area from Cleveland to Akron. Rep. Fudge has been Chair of the Congressional Black Caucus since 2013.
Fudge, a 1971 graduate of Shaker Heights High School, earned a Bachelor of Science degree in business from Ohio State University in 1975. In 1983, she earned a law degree from Cleveland–Marshall College of Law, part of Cleveland State University. Immediately after college, she worked as a law clerk and studied legal research. She also worked in the Cuyahoga County prosecutor's office. Fudge was the Mayor of Warrensville Heights, a middle-class and mostly African-American suburb of Cleveland, from January 2000 until November 18, 2008. She was victorious in her first ever run for elective office, becoming the 1st woman and 1st African-American elected mayor of the town. She was chief of staff to 11th District Congresswoman Stephanie Tubbs Jones during Jones' first term in Congress. After Jones' unexpected death on August 20, 2008, Fudge was selected as Jones' replacement on the November ballot by a committee of local Democratic leaders. Fudge won the November 4 general election with 85% of the vote. Fudge is a past president of Delta Sigma Theta sorority, serving from 1996 to 2000, and is a co-chair of the sorority's National Social Action Commission. In 2003, she was a member of the Shaker Heights Alumni Association's Hall of Fame Class. 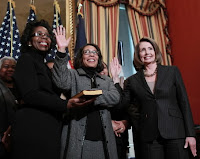