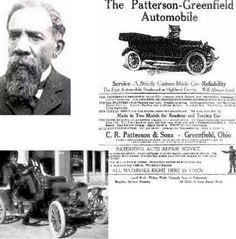 The company was founded by Charles R. Patterson, who was born into slavery in April 1833 on a plantation in Virginia. His parents were Nancy and Charles Patterson. Patterson escaped from slavery in 1861, heading west and settling in Greenfield, Ohio around 1862.  In 1873, Patterson went into partnership with J.P. Lowe, another Greenfield-based carriage manufacturer. In 1893 Patterson bought out J.P. Lowe’s share of the business and reorganized it as C.R. Patterson & Sons Company. Charles Patterson died in 1910, leaving the successful carriage business to his son Frederick who in turn initiated the conversion of the company from a carriage business into an automobile manufacturer. The 1st Patterson-Greenfield car debuted in 1915 and was sold for $850. With a four-cylinder Continental engine, the car was comparable to the contemporary Ford Model T. The Patterson-Greenfield car may, in fact, have been more sophisticated than Ford’s car, but C.R. Patterson & Sons never matched Ford’s manufacturing capability. Estimates of Patterson-Greenfield car production vary, but it is almost certain that no more than 150 vehicles were built. The company soon switched to production of truck, bus, and other utility vehicle bodies. Its school bus bodies in particular became popular as Midwestern school districts began to convert from horse-drawn to internal-combustion-fired transportation by 1920.