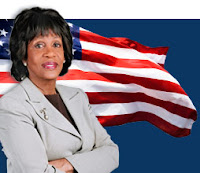 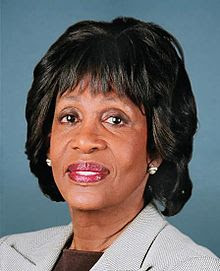 Maxine Waters is the U.S. Rep. for California's 43rd congressional district, and previously the 35th and 29th districts, serving since 1991. She is a member of the Democratic Party. She is the most senior of the 12 black women currently serving in the United States Congress, and is a member and Former Chair of the Congressional Black Caucus. Before becoming a member of Congress she served in the California Assembly, to which she was 1st elected in 1976. As an Assembly member Waters advocated for divestment from South Africa's apartheid regime. In Congress she was an outspoken opponent of the Iraq War.                                                                    Waters was born 1938 in Kinloch, Missouri to Remus and Velma Lee Carr Moore. She graduated from Vashon High School in St. Louis, and moved with her family to Los Angeles, California, in 1961. She worked in a garment factory and as a telephone operator before being hired as an assistant teacher with the Head Start program at Watts in 1966. She enrolled at California State University, Los Angeles), and graduated with a sociology degree in 1970. In 1973, she went to work as chief deputy to City Councilman David S. Cunningham, Jr.. Waters entered the California State Assembly in 1976. While in the assembly she worked for the divestment of state pension funds from any businesses active in South Africa, a country then operating under the policy of apartheid and helped pass legislation within the guidelines of the divestment campaign's Sullivan Principles. She ascended to the position of Democratic Caucus Chair for the Assembly. In 1990, Waters was elected to the U.S. House of Representatives for California's 29th congressional district with over 79% of the popular vote. She has been re-elected consistently with at least 70%. In 2011, Waters voted against the National Defense Authorization Act for Fiscal Year 2012 as part of a controversial provision that allows the government and the military to indefinitely detain American citizens and others without trial. Waters co-sponsored Rep. John Conyers' bill calling for reparations for slavery to be paid to black Americans. In September 2011, Waters called for the implementation of a federal "jobs program of a trillion dollars or more. 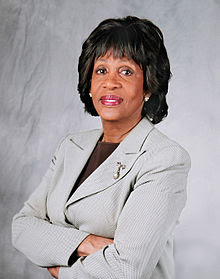